Or, as my dearly beloved would say, “God, you’re stubborn!”

So, the saga of the space behind the wall in the street-side bedroom continues.  Our return to Sainte-Foy this summer marked the commencement of chapter 2.  Once we had Les Terraces prepared for the arrival of summer guests (I’d rented us out of the house!!) I went and bought some paint-stripper to remove what we strongly suspected was several decades of (flaking) lead paint from the doors we’d purchased at Easter and see what lay beneath.  Commercially produced paint-stripper is expensive: a 19€ pot didn’t even get the front of one of the doors half-way bare.  Our neighbour, Anne-Marie, spotted me hard at work in the garage one morning and stopped by to see how I was faring.  She declared the doors and their frame to be “trés jolie”.  Anne-Marie & her husband, Michel, have very successfully renovated several very old properties to a standard that has left us astonished, so their advice is always well-taken.  She recommended “lessive de sud” (that’s what it sounded like) to remove the paint, but cautioned that I must be properly protected with overalls, wellies, gloves, mask and eye-wear before commencing.  I thanked her, finished what I was doing and went home to do some research.  Her solution turned out to be a caustic soda solution (lessive de soude).  The necessary bits & pieces were duly purchased and Mme B- kindly opened the door to her buanderie (this week’s word is laundry-room) so that I had access to running water.

Some 40-45 hours later the doors had undergone a massive transformation:

I have to confess to being rather disconsolate at this juncture: I’d spent hour upon sweaty hour refurbishing the doors and their frame and, to me, they aren’t looking as I hoped they would.  The wood had, in spots, been badly worm-eaten and 2 panels cracked.  The exception to this is the hinges where, after much diligent work with jeweller’s screwdrivers, steel wool and (thank God) many Dremel tools, we had managed to uncover simply beautiful ironwork, which has been varnished to preserve it in its original glory.  The bonus to all of my hours in the garage is that we now know many more of our neighbours who have watched “la petite (haha) anglaise” renovating inconsequential bits of history.  There are probably a dozen people whom we now know by sight to say “Bonjour! Comment ça va?” to.

Sylvain, who had renovated the gnarly damaged feet of the frame for us at Easter, had told us that when we were ready we should cut a hole in the wall 1cm larger than the inside of the frame.  He’d come and do the installation when that phase was complete.  Cue warning sounds and sirens! 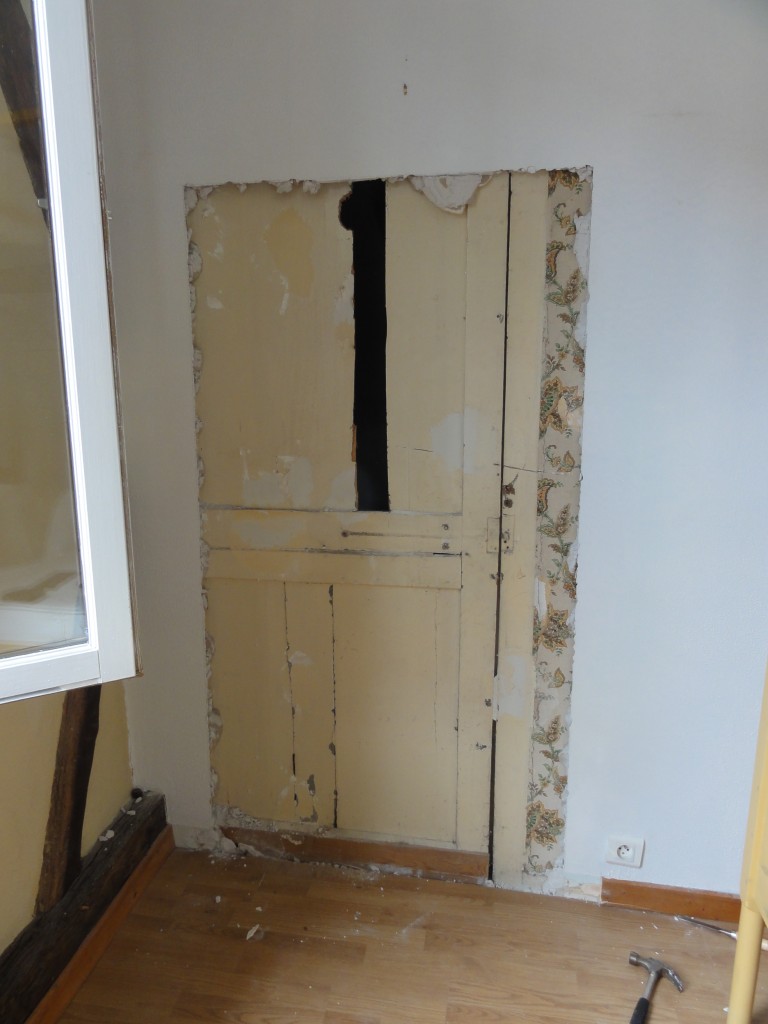 Problems!
1) The door we uncovered is taller than the opening.
2) It opens into the room.
3) See the band of super-classy wallpaper to the right of the frame? That’s a wall, with a newel-post and wattle-&-daub behind it.
Happy Sunday!

After much sweating, swearing and some “creative” use of the few tools I had at my disposal we finally got as far was we could.

After Sylvain left I did some cleaning.  I was fascinated to find dozens of mussel shells (on closer inspection you can actually see them in the columbage – picture to follow), a few oyster shells, a lamb bone and a small vertebra in the disturbed/discarded wattle & daub, which leads me to believe that the workmen all those 100s of years ago must have thrown their lunch remains into the mud & straw mix, along with lots of hemp string.

My concern, such as it is, is that I’m worried about what I’m going to have to do (to keep myself out of trouble) when we’ve finished this final project.  Any ideas?

2 thoughts on “Never under-estimate a beginner!”