In which time is temporarily turned back

Étienne’s walk through the vines and woods introduced us to the making of country coronets (take the needles from long-needled pine trees, and oak leaves.  Thread the needles through the leaves and make a sort of daisy-chain).  He showed us that if you take an opened out pine cone in your hands and pluck the scales you make a sound similar to raindrops falling, or soft beats on a xylophone.  In his bag of tricks he had a medieval  “rain-maker”.  I’m not sure what made the noise, but it was attached to a length of twine and was spun around the head and made a sort of humming-whooshing sound.  Perhaps it was another piece of cane.  Apparently the same thing has been found in use by tribes in Africa.

A rustic clarinet made a wonderful sound, one that made the hairs on the back of my neck prickle just a little.  Étienne stood in the light of the setting sun and played a tune that evoked an ancient atmosphere.  He invited us to consider how much fear the sound would strike in the hearts of your enemy when there were 300 being played (we were in sight of the hill upon which the first battle of the Hundred Years War was fought). (Click here for a higher-def version)

When he had placed the little clarinet back in his bag, remarking that he was sure that he had awakened the little people roundabouts, we continued our walk, passing more vineyards and the prettiest little summer cottage in the vines over which Ian and I both drooled (sorry, terrible picture), Étienne set us his next challenge: 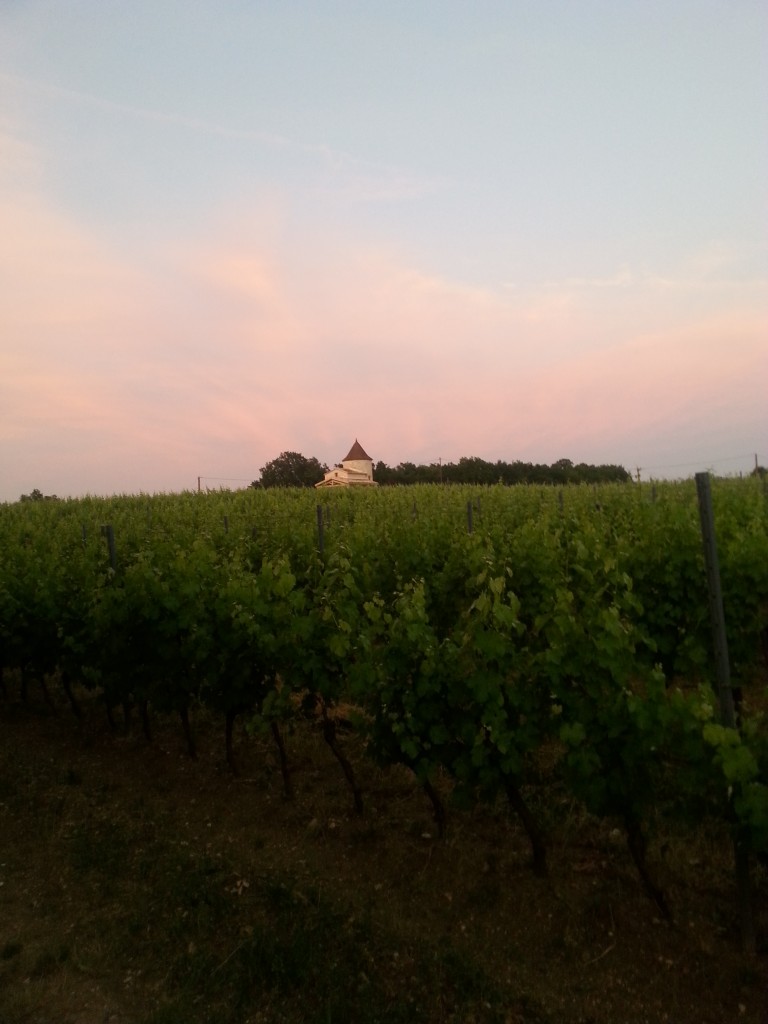 This time none of us was to make a sound as we walked quietly down a dark lane in the twilight.  We were to use our ears to listen carefully to the sounds of nature and, at the bottom, we’d discuss what we had heard.  I was able to identify an owl and some blackbirds.  Others claimed sanglier (wild boar) and chevreuil (roe deer).  Then we moved on a little further still and, at a fork between two cart tracks, Étienne distributed the various instruments he had made and brought with him amongst the group and, as the world was finally covered with a cloth of black velvet night, with Jupiter shining brightly in the sky, a small band of middle-aged people was time-transported back through the centuries and, for 15 minutes or so, it was possible to imagine that we were in the 15th century (or earlier) instead of at the beginning of the 21st.  Magic had happened.  It was wonderful.

And then, all too soon, it was over.  Reluctantly, instruments were returned to their owner/creator and we descended the last few hundred yards and to reality.  Étienne eased the pain, however, by playing his clarinet until we were out of earshot.

I thought that we were done.  But we weren’t.  Back in the alley between the salle des fetes and the other building the trestle tables had been set with cups, bowls, spoons, plates of bread and containers of grated cheese. Bottles of wine and water were ranged down the length of the table and we were invited to partake of onion soup, followed by cake.  It was midnight by the time we got home.  What a wonderful night we had enjoyed.

For more information on Étienne Roux, please visit his site at www.eveilsonore.canalbog.com