A while ago I wrote of a trip we made to the Gouffre de Padirac.  As we were driving such a distance I had suggested that we ought to try and maximise the number of things that we did in the day and visit Rocamadour on the way back to Sainte-Foy-La-Grande.  My menfolk – father, husband and son – all acquiesced gracefully thinking, I’m sure, that resistance was futile, particularly as I was doing the driving!

So, fresh from the delights of the cool caverns of Padirac, we drove the few kilometres to the historic town of Rocamadour.  I’m not much of a fan of French road signage and the signs at the little sort-of-towny area at the top of the valley that more trusting folk might have taken for the town were positively ambiguous.  However, we got there.  The roads are narrow, and the switchbacks devilishly tight and steep, which is saying something when coming from someone  from the BVI.  I dropped Graham & my father at what appeared to be the top of the high street – swiftly, so as not to be crushed by the traffic.  Mo and I went blindly down the hill in search of a parking space.  We found one – on the edge of a field in which some sort of mediaeval reconstruction event was taking place. 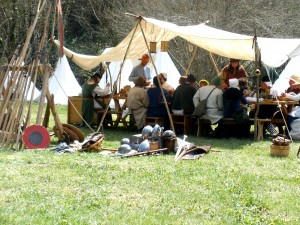 lunchtime at a mediaeval renenactment

There were men jousting, and all manner of tents set up around the edge of the field.  We had no time to do much more than glance curiously as we needed to make our way up to the top of the hill, meet up with the rest of the party and find somewhere to eat lunch.  We were lucky enough to spot a little “toy train” that, for a few Euro per person, gives you a tour of the town saving legs, breath and sense of humour.  We quickly snagged 2 tickets and leapt aboard the train that was just pulling out for the hill top.  It was a few Euros well spent, trust me! 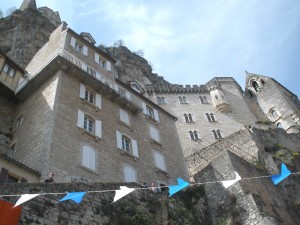 The beautifully renovated buildings of Rocamadour

and we began to stroll down the town’s single street.  The buildings have been beautifully renovated, but the naff, tasteless wares that were being sold from every shop front occluded this good work.  It was awful.  I was instantly reminded of Epcot, which I hated both times I went there.  There were people wearing nasty, tacky nylon pseudo-mediaeval costumes – the works: pointy hats and shoes.  Some were dressed as serving maids (or is that wenches), while others pranced around playing recorders and such.  It was clearly all a bid to create atmosphere and whisk you back the the town’s heyday when pilgrims such as Eleanor of Aquitaine travelled there to revere the Black Madonna.  It didn’t.

We had a pleasant, if expensive, lunch at the Best Western (yes, really) half way down the road.  The hotel boasted fabulous views of the valley and we conjectured for a while about the defensive positions that had been constructed on the opposite side of the valley while we ate.

After lunch we continued down the high street and along the valley floor back to the car.  It was a flying visit and, sadly, the history of the town, which is significant, was subsumed by the commercialism which seems essential to keeping these tiny enclaves alive.  I don’t know that I’ll ever bother going back.  If I do it will be in the winter months when (hopefully) most of the shops are closed and maybe the town can reveal its true nature and allow an enquiring mind to look beneath the surface to appreciate its hidden depths and astonishing heights. 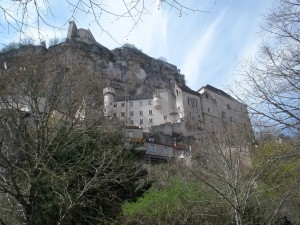 Rocamadour’s heights are there, but you have to be able to see through the tourist schlock