Summer has finally arrived in SW France – late, but with a vengeance, as it has throughout western Europe actually.  It’s rather nice to have washed and stashed away the wintery clothes again, in the hope that the warm weather will continue unabated until October when we very reluctantly head back to our office on the other side of the pond.

Here in the country much is made of long, warm summer evenings and there are night markets of all descriptions, festivals and fairs too numerous to mention.  An annual event here in the Pays Foyenne is a picnic dinner on one of the two road bridges over the Dordogne that join the small towns Sanite-Foy-La-Grande & Port Sainte-Foy et Ponchapt.  This year we were able to go to it.  Trestle tables and chairs were set up along one side of the length of the bridge (the other side left clear for emergency vehicles to transit, if need be).

The idea, we belatedly discovered, is to make food that is shared with others, rather than just packing one’s own meal, as this encourages interaction with others.  Few people actually did this, which was a pity but understandable.  If we’re here at the right time next year I shall endeavour to do so (but still pack something specifically for us too, just to be on the safe side!)

The late start to summer has meant that the sunflowers – which normally have huge, heavy, dinner-plate sized flowers that are starting to drop, tiredly at the top of the stems by this time of year – have only just come into bloom.  I saw the first ones this morning, travelling home to Les Terraces from Bergerac, their faces raised to their name-sakes.  It is a sight that never fails to make me smile.  Most of the fields planted with sunflowers are a week or so away from being in bloom.  When they are we will take a drive just for the pleasure of the sight of acres of them interspersed with the green of the vines and the gold of ripening grain and drying rolls of hay.  Pictures later, perhaps.

I love watching the swifts in the early morning as they swoop mere centimeters above the still surface of the Dordogne and, with sublime elegance, drop for a fraction of a second to scoop a beakful of water to drink before curling away to resume their endless quest for insects.  There is no such thing as a fat swift!  All day long they arc through the sky above our heads screeching as squadrons of them chase their quarry, sometimes they are so close that you can hear the whoosh of wings cutting the air.  They are wonderful to watch.  However, every once in a while – exceedingly rarely, I hasten to add – the downside to such close proximity with these wonderful birds makes itself apparent, as a guest learned over the weekend …….

Tony probably ought to have headed out and bought a ticket for the lottery that afternoon, but he didn’t.  You can just see me in the background – killing myself laughing!

Finally, yesterday was Bastille Day.  As we’re lucky enough to be directly opposite the spot on the riverbank where the commune’s firework display is set up we enjoy having a few friends around for supper and to enjoy the unrivaled view of “les feux artifices”.  While we were preparing it was nice to see a boat larger than a canoe/kayak plying the waters outside the house.. 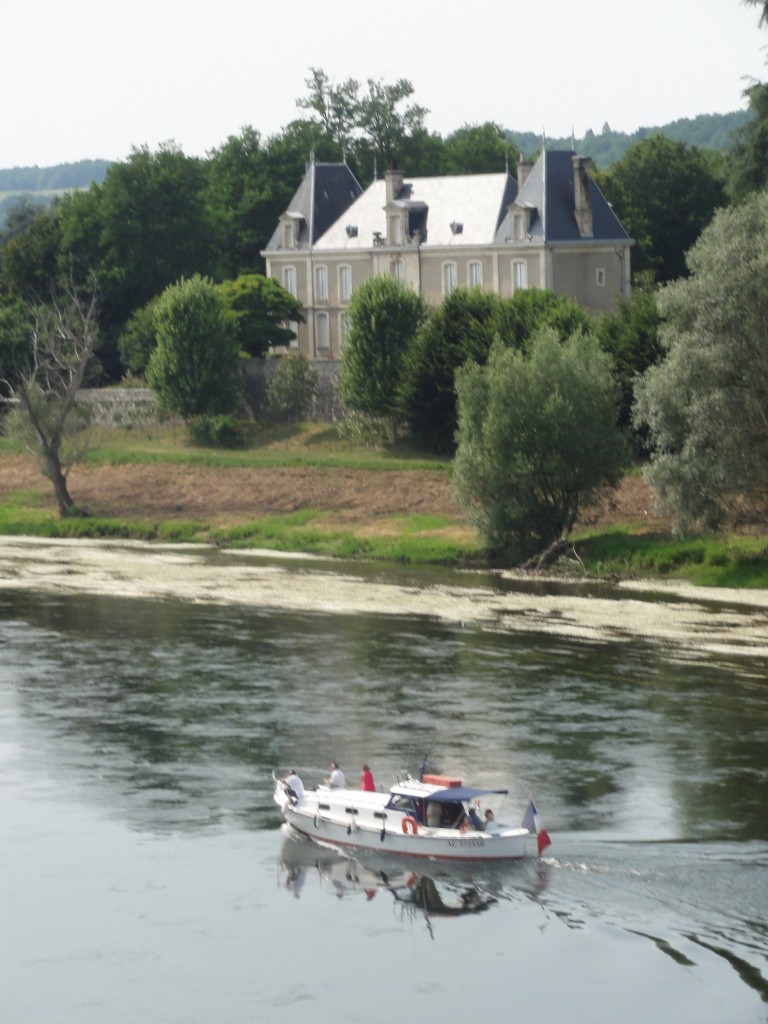 The evening finished with a bang – several, actually.  Here are a few of them captured in one shot.