The French word is Canicule.  It happens at this time of year.  In fact, I blogged about a heat wave back in August of 2011.  However, this year’s heat wave is a bit of a scorcher.  The Government has been issuing warnings about it for several days, and people are taking note with very good reason.  This morning I dropped in at the boulangerie on my way home from a (cool) early walk and found this sign on the counter:

Bordeaux is currently the hottest city in France (according to accuweather) 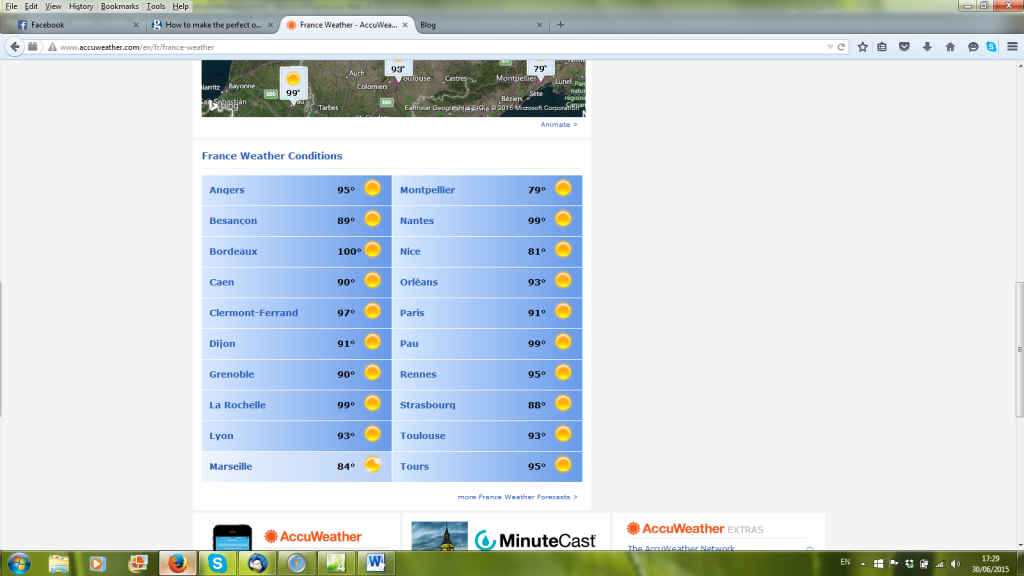 Recalling that Wunderground shows a weather station here in Sainte-Foy-La-Grande, I looked it up (it says Port-Sainte-Foy, but Rue Marceau is in Sainte-Foy) .

Being by the river gives us a little relief …..  the thermometer that is taped to the terrace window shows a mere 36°C

I had a spare, which I first put (still in its packaging) flat on the table.  The needle clocked all the way around to the -15C spot, so I brought it back inside, removed it from the packaging and put it back again.  After a couple of minutes it was way beyond the 50°C mark.  Clearly, it can’t take the heat.

Everywhere you look shutters are closed across doors and windows.  Nothing is stirring.  There aren’t even many people on the beach at the Plage des Bardolets at the moment, but I am sure that will change as the sun has sets behind the hill and the heat abates a little.

I read an interesting book recently: “The Etymologicon: A Circular Stroll through the hidden connections of the English Language” by Mark Forsyth.  In it, he explains the origins of the phrase “dog days”, as in “the dog days of summer”.  Apparently, during the height of summer Canis Major, aka Sirius (the dog star), isn’t visible [in the Northern hemisphere].  The ancient Greeks calculated that this happens between 24th July & 24th August, which coincided with the hottest time of the year.  Thus the period came to be called the dog days.  I’ll leave you to buy Mr. Forsyth’s book to read the rest of his explanation, but I will share with you his revelation that over the course of the 2,000 years since these calculations were made, the dog days have shifted and now begin around 6th July.  Today is 30th June, showing that those ancient Greeks knew a thing or two.  So, how do we make the leap from dog days to Canicule?  Well, the Roman name for Canis Major was Canicula (meaning dog).  The French word is a direct derivation from the Roman.  Here endeth the lesson!

But I will leave you with an astonishing fact ….. never, ever did I think that I would find myself uttering the phrase “it’s too hot to drink red wine,” but I am very close to saying just that!

As I finish, the heat on Rue Marceau has cranked up to 39.4C, with a heat index of 42C and tomorrow is forecast to be the same temperature as today.  Jolly good!