A while ago I wrote about the improvements we have been planning to make to the 2nd floor terrace at Les Terraces.  Robin started work on this project last week and yesterday Trudi sent pictures of the progress he has made thus far……

In this first picture you can see that the wall has been lowered and Robin has started the rendering process.

The second picture shows the local stone that Robin sourced to finish the top of the opening (the neatly stacked slabs to the right).
Graham and I were wondering what the huge chunks of stone on the left are, and how on earth Robin had ever managed to manhandle them up 2 flights of stairs.  So we rang Robin and asked – it turns out that these stones are what he removed from the wall.  The whole back of the house is built from these enormous blocks of sandstone!  We’re surprised, and I think that Robin was too, as we had been expecting the back wall to be columbage instead of solid stone.  But, on reflection, this heavy-duty construction makes sense as that facade of the house forms part of the bastide wall. 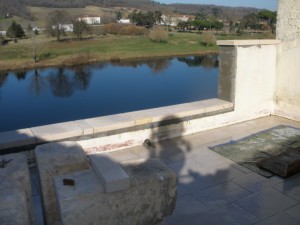 The new opening with local stone capstones in place

Now the capstones have been added (replacing the old clay tiles with which the wall had previously been topped).  Doesn’t it look great?!

The next phase is for Edward to come in and make the railings to safely fill the gap.  This is to be done next week.
We’re thinking about keeping the blocks of sandstone and using them as rustic “seats”, or a plinth upon which to rest pot plants.  Ideas are welcomed.
Oh, now we’re just busting to get home to Sainte-Foy-La-Grande and see the entire transformation complete.  I daren’t count the minutes yet – even weeks are too disheartening!