Yesterday was the “Fête de la Rivière” in Sainte-Foy-La-Grande.  It was a coolish, dull sort of day that wasn’t conducive to people coming in droves to see what was happening on the Quais.  A lunch-time sortie with the dogs had revealed that there was a small collection of canoes and kayaks on the Quai de la Breche; they were mostly fibreglass of various vintages, with a couple of modern plastic jobbies, and two lovely handmade wood canoes that date from the very early 1900s.

The posters said that the event was to kick-off at about 4pm, so it was easy to hang out on the terrace and watch for signs of action.  Sure enough, shortly after 4 there were chaps setting up inflatable basket and football goals on the road outside the house, and a fair number of people wandering around.  As it was pretty much time for another puppy run, Laura and I set out to see what we could see. In addition to the canoes on the Quai there were a few teenagers on the water on stand-up paddleboards, but no actual water activity.

There were plenty of kids enjoying the basketball and football activity (one that Brin was desperate to join: she loves playing with a ball).  Further along, on the Quai de Quebec, there was a wonderful collection of traditional wooden games, such as skittles, a version of shuffleboard and so on.  These were available for anyone to play. 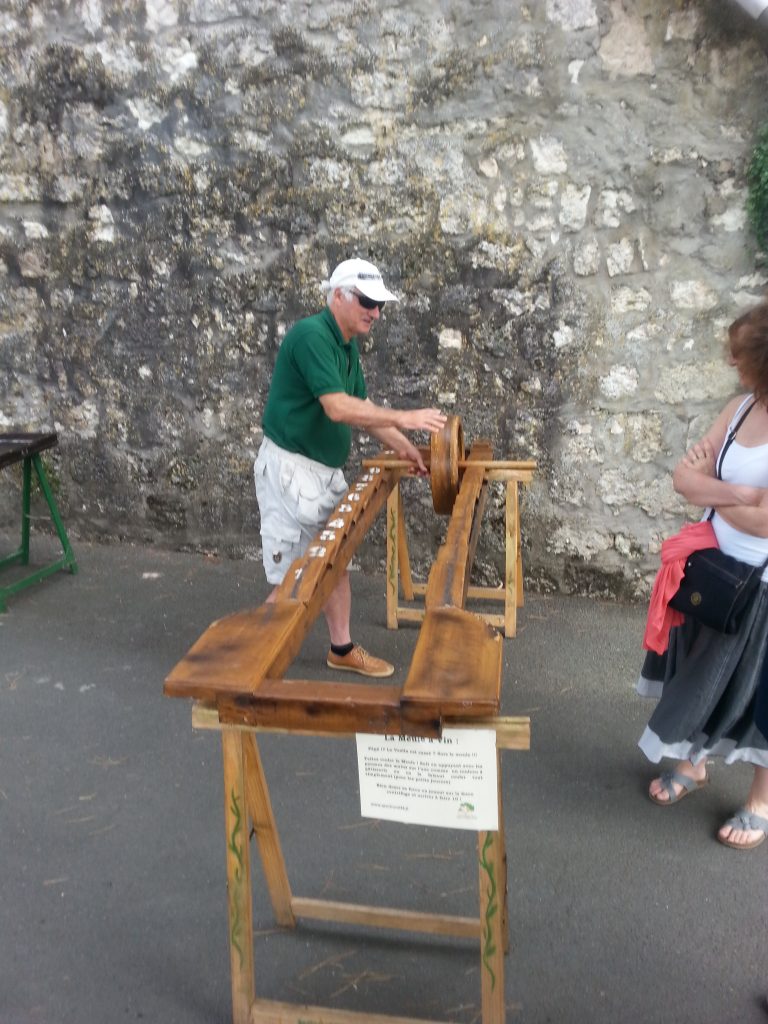 Laura and I each tried to play a type of skittles that used a spinning top to knock the skittles over (not easy when you’ve a bouncy puppy in hand).  It was fun to see how our engagement with the games drew others to the table.  We showed them what to do, and moved on ….. Brin was wanting to join the barrel-rollers!

There is, apparently, a group from Lussac St. Émilion who perform regionally, demonstrating and teaching this old skill.  The object (borne, I suspect, from the old time-is-money routine) is to roll a barrel as quickly as possible over a set distance.  Their flier makes reference to other clubs in France so, clearly, it’s quite popular.

Further down the Quais there were Shetland poneys (yes, that’s the French spelling) upon which lots of little girls were enjoying trial rides, while up in the car-park there were short zip-lines and wires strung between the plane trees.

On the Terrasse Francois Mitterand, there was the opportunity to try one’s hand at making a mosaic (again, not possible with dog in hand), but there were quite a few people – mostly kids – sat intently working on creations at trestle tables under the mulberry trees.  And there was a lady reading a story to some adults, and more games, and (rather to my surprise) several food stalls setting up around the edge of the car park.

The new vocabulary for the day was provided by a candy-floss stall.  The French for candy-floss appears to be “Barbe de papa”.

On a final note, the delightful lady from whom we buy our milk every week, was swift to explain that this week the milk was an interesting shade of pink, courtesy of her girls breaking into a beetroot field and gorging themselves.  The (very subtle) results are here for you to see: